(reposted from here thx to a comment by Matt_C)

I would need help of an expert, familiar with the Black Cube.

I’m in the course of building/designing a Cube carrier board, and have a scheme which I believe is fully working. However, I observe two points which I just can’t figure out. I would much appreciate input as regards these points.

FIRST SOME BACKGROUND (a bit lengthy):

I have three Cubes for my tests, which I will call Cube0, Cube2, and Cube3:

In order to establish a comparable test situation I have flashed all three cubes first with ArduPlane to wipe out the parameters, then flashed them with ArduCopter 3.6.7 (or BetaCopter but this doesn’t matter here), and set “my default” parameters by loading one and the same .param file into MissionPlanner and writing the params to the cubes. I use the Nuttx v3 firmware versions (ArduCopter-v3.px4).

I have two test environments, first my home-made cube test carrier board and second a Solo motherboard with the IMX6 removed and a battery plug for powering:

On the Cube test carrier board I can power the Cube from a 5V3 powerbrick source or from the USB plug. I also have connected the PC to the Serial5 debug console to see what’s going on. I can change some things by use of some pin headers.

I have waded through what I believe are all publicly available electrical schemes for the Cube (FMU), PSM, and CB, as well as through the relevant pieces of code in AP and the bootloader.

The result of my research into the electrical schemes and codes is that only the connections VDD-5V-IN-PROT and VBUS on the cube’s 80-pin header (and of course GND) are relevant for the following. All other ‘power-related’ pins, VDD-SERVO, VDD-SERVO-IN, IO-VDD-3V3, VDD-3V3-SPEKT-EN, VDD-5V-PERIPH-EN, VDD-BRICK-VALID, VDD-BACKUP-VALID, VBUS-VALID, VDD-5V-PERIPH-OC, and VDD-5V-HIPOWER-OC, are irrelevant for the following (for different reasons, but irrelevant).

The VDD-5V-IN-PROT is the Cube’s main 5V power supply. VBUS is connected to the Cube’s internal USB plug, protected by a Z-diode, and connected to the PA9 VBUS pin of the STM32F437. This is the part is encircled by the blue line in the scheme drawing below.

Four test conditions will be considered:

A) Cube test carrier with Scheme2

B) Cube test carrier with Scheme1

The three schemes are these:

The following deals with what happens after powering up the cube/system. The chain of events can be broadly distinguished into two phases:

Observations for test condition A:

Observations for test condition B:

Here the behavior is very different for Cube0/Cube2 and Cube3.

For Cube0/Cube2 everything works fine. Both cubes undergo the bootloader delay phase, start up and behave just fine, irrespective on how they are powered, through the 5V3 powerbrick or the USB.

However, Cube3 undergoes the bootloader delay phase, starts up and behaves just fine ONLY if powered by the USB! If powered from the 5V3 powerbrick it undergoes the bootloader delay phase, but then gets stuck and does NOT jump to the AP initialization! The orange LEDs are then on constantly, and the Cube appears to be just “dead”. There is absolutely NO output on the debug console Serial5, so the AP initialization phase wasn’t even started.

Note that the electric connections in Scheme2 are supposed to mimic the original PSM, which instead of the diode OR-ing has a power switch, but otherwise I can’t see any electrically relevant difference.

Note also that the problem exists for only Cube3, which appears to be an earlier hardware revision than Cube0&Cube2.

However: The cubes do NOT undergo the bootloader delay phase! Instead they are only briefly in the bootloader and then jump directly to the app i.e. AP initialization.

In the Scheme3 used here the VBUS line and therefore the voltage at PA9 is forced to low by connecting it to ground (accordingly here the system must not be powered by USB but just from the powerbrick).

The behavior is exactly as that for test condition B, when powered from the 5V3 powerbrick. Cube0/Cube2 just work fine. Cube3 undergoes the bootloader delay phase, but then gets stuck and does not jump to the app.

There are two questions from the above, first why Cube3 behaves differently to Cube0/Cube2, and second why the bootloader delay phase is not skipped except when using the Solo motherboard.

Why does Cube3 behave differently to Cube0/Cube2?

The only difference I can see between ‘powered by USB’ and ‘powered by the powerbrick’ is the voltage on PA9. So I think the question can also be stated as: Why does Cube3 not start the AP app when PA9 is low, but gets stuck and fails to start?

Note that the difference of Scheme1 as compared to Scheme2 is that it forces PA9 to high in all conditions, which seems to confirm the conclusion that it’s the voltage level on PA9 which is relevant.

Why is the bootloader delay phase not skipped except when using the Solo motherboard?

This however is appears to be in contradiction with the bootloader code. And it raises the question what is so magic about the Solo motherboard/PSM that here the bootloader delay phase is skipped?

All 3 of them are solo cube’s the ones for sale look more like this. I edited your post to reflect this. 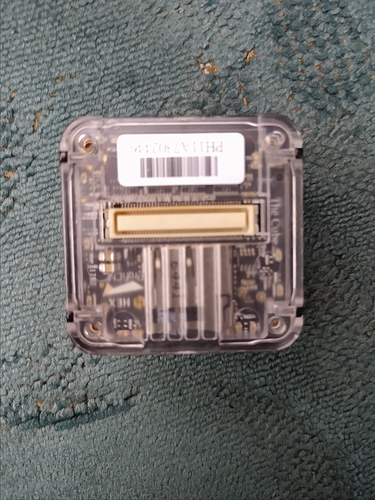 As mentioned, they are cubes extracted from 3DROBOTICS Solo drones.

They have a different bootloader to assist in how it talks to the companion computer.

The 2.1 was designed for standalone use and has a normal bootloader.

Depending on when in the release cycle of Solo each was programmed, there were different behaviours.

Looks like cube 3 is a very early Cube with the 4th corner on the PCB.

I wouldn’t use that one for anything, it’s as good as junk.

ah, it seems I can post/edit now, still just one pic per post, so here the next pic 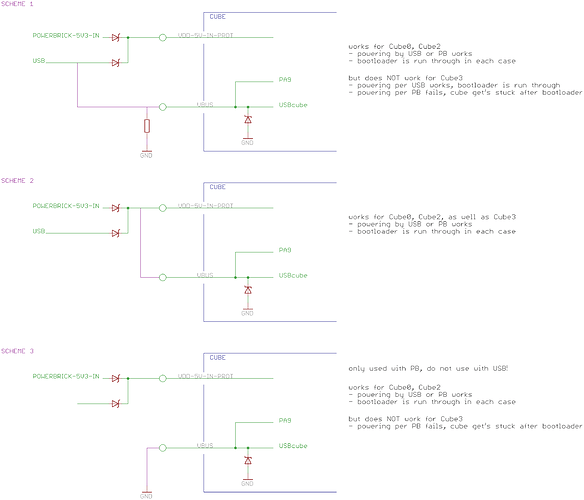 All 3 of them are solo cube’s the ones for sale look more like this. I edited your post to reflect this.

As mentioned, they are cubes extracted from 3DROBOTICS Solo drones.

yes, these are cubes from/for Solo. They are very attractive from the price point, and there are still many out there

They have a different bootloader to assist in how it talks to the companion computer.
Depending on when in the release cycle of Solo each was programmed, there were different behaviours.

ah, didn’t know this or considered this possibility. Thx for clarifying!

Looks like cube 3 is a very early Cube with the 4th corner on the PCB.
I wouldn’t use that one for anything, it’s as good as junk.

btw, just to report, in case anyone cares, I made the observation that when I replace the USB S-diode in the above schemes by an ideal diode then Cube0&Cube2 and also Cube3 behave like on the Solo motherboard, i.e. no problem with Cube3, and the cubes skip the bootloader delay phase when powered from the powerbrick. This at least clarifies the “magic” of the motherboard/PSM. One maybe can understand that the bootloader delay phase isn’t skipped, but why a S diode would make Cube3 get stuck after the bootloader is still strange. Anyway, since I planed to go with an ideal diode anyhow, I guess I leave that to the unresolved mysteries chapter.

Many thx for the responses

Have you considered using the PSM as per the original design?

It manages all of this for you with the ideal diode etc.

Or you can make your own.

Have you considered using the PSM as per the original design?

I’m afraid I have to say I did not, and this on purpose. The PSM is certainly a nice and proven piece of hardware, but I think it’s too sophisticated for what I think I need and want (and I also think that it makes all existing cube carriers expensive, from my perspective). Pl note that I’m all DIY&hobby, and thus prefer to go with a minimal BOM, when it does the job.

Even though it’s a bit OT, I’d like to also admit that the main reason I have looked into this was a significant dissatisfaction with the available cube carriers. I mean, again, they certainly are nice and proven pieces of hardware, but some aspects, mostly of the practical kind, I just didn’t liked. Doing my own cube carrier, albeit admittedly very basic and simple when compared to e.g. yours, also allows me to do “nonsense” I couldn’t do otherwise.

I hope you find that acceptable and not inappropriate. I’m just trying to have fun with the ArduPilot stuff.

No worries! I absolutely support as many carrier boards as possible, that’s why I designed it to be modular

Keep up the good work!

I absolutely support as many carrier boards as possible

I understand what you’re saying and am happy to do so but I’m not sure what exactly you’d like me see to do.
Should it be a link to here, https://github.com/proficnc/The-Cube, or to here, https://github.com/proficnc/The-Cube/blob/master/CB_REV_C_Altium/Carrier%20board%20footprint%20approval? If a link, where should it be placed, in the Eagle design file? The github repo? With what “key words”, etc…

Ideally, could you give me an example or suggestion I could use?

“The Cube footprint and hole pattern are protected under a Patent, ProfiCNC offers the patent for your free, non exclusive, perpetual use on carrier board design, to gain this license, please follow the instructions at https://github.com/proficnc/The-Cube, Thanks”

many thx for the suggestion.
I guess I won’t put it up in that wording however, since honestly I don’t think that this is a valid legal claim (unless you or anyone proves me wrong) and I’m the sort of guy who cares about the statements she/he is making in public material, but I certainly fully support your intention. I’ll find a proper wording which will certainly include the link. Since I have seen that sentence also on the schematics, I guess you’re ok with me putting it in the schematics, right.
thx for your kind help,
Olli

btw, just in case anyone should happen to be interested, this is there this is currently standing at, and heading too: http://www.olliw.eu/2018/uavcan-for-hobbyists-blog/#20190313

to conclude the thread I’d like to mention that I finally have released the UC4H Cube Carrier board mentioned and shown in the above (https://github.com/olliw42/uavcan4hobbyists/tree/master/pcbs).

It actually works and flies, a demonstration you can find in this video at 6:30:

I also did two videos discussing the carrier in some more detail:

Thanks for bringing The Cube to the community !!!