I just updated my herelink to the latest beta firmware and while many things seem nice, I (still) can’t configure the buttons from within QGroundcontrol to do Mavlink stuff like changing flightmodes.

I had the same problem with the previous beta and reported the bug here: Herelink September Beta update available - #5 by nyquist2205

Not sure how to interpret all these grey boxes in the button settings, but just in case I did all of the joystick calibrations in the herelink settings app and also the radio calibration in QGC. But it still looks like this and doesn’t work. The boxes with numbers are flashing if buttons are pressed, but no flightmode change is done: 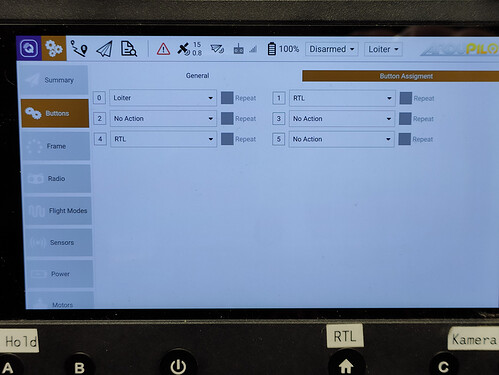 Is it just me or is this issue still not resolved in the current beta? Would be nice to make some use of these buttons…

Yes. Mavlink Buttons don’t work in QGC in recent beta currently. I understood that the Hex Team is looking into it. There is another post about this also.

Thanks for the confirmation, so at least I don’t have to further investigate this…
Hopefully this will be resolved soon, doing everything on the touchscreen is pretty sketchy for me.