Crashed my BELIEVER...not sure why

I’ve been flying a Believer for several months now. It has been a great plane. However, the plane has experienced inconsistent behavior with throwing in dedicated TAKEOFF mode at times.

Around 2 out of every 10 throws would result in a right roll/crash. This wasn’t going to be reliable enough for mapping work.

I was using Castle Creations Talon 60 ESC’s for each motor and the BEC from one of them to power my servo rail.

Last week, I decided to forego any potential ESC output issues that weren’t showing up in logs and decided to swap them for two APD 40A DSHOT ESC’s to eliminate any calibration problems since they do not require it. These were set up on Cube Aux’s 3 and 4 with corresponding mask, etc.

The APD ESC’s do not have BEC power so I installed a new KDE UBEC (KDEXF-UBEC22) that I had sitting around never used. I set the UBEC for 5V and confirmed 5V at the output to power the Cube servo rail.

Here’s where I may have screwed up…I also installed Arduplane 4.0.7. I confirmed my tune settings as well as a few other settings but did not do any re-calibration of accels or compass.

All bench tests were fine. I went out to the field, armed everything, and threw the plane. The takeoff was perfect at first. The plane climbed for a while and then began to turn to the right per my TKOFF settings. The plane then began to sink a bit. This got my attention and started to get ready to switch modes. The plane continued to sink. I switched to manual mode and gave some throttle/up elevator to gain altitude. I got the plane a bit higher and noticed some fluttering going on in the control surfaces, mainly the rear V-tail surfaces. Flight became erratic and I had to fight it until the plane eventually dove into the ground.

I’m not an expert at reading logs and need to determine if: 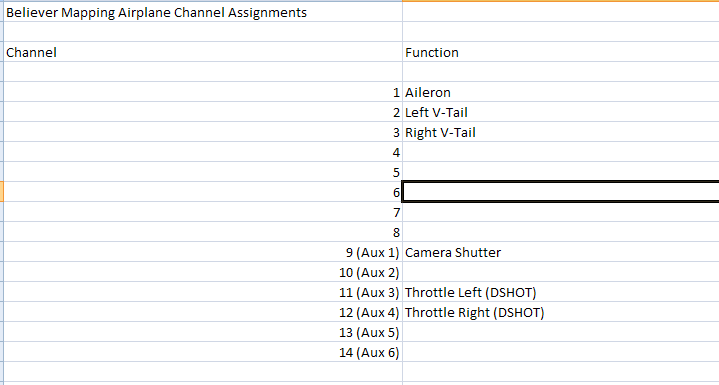 so a ubec you set to 5v those spike are not normal.