Has anyone tried an HDMI 1080p camera? Any recommendations would be greatly appreciated.

As it stands there are few cameras that support proper live hdmi output.

Many of the action cameras that are fitted with a micro HDMI don’t actually work or output live feed, all of the standard FPV ones like Runcam are all analog too.

Here and now using a GoPro with micro HDMI is the best option, not all models have this but some do.

A very good option to look at is the Hero 2018 as this is basically a Hero 5 Black with crippled firmware and this can be modded.

A cheaper option is the Eken H9. This is what I’ve been using, nothing amazing but is 1080P.

Just watch out on the hero 7, if you have stabilisation enabled, it significantly increase the lag to the HDMI

That could be why my Z CAM E1 only works some times. 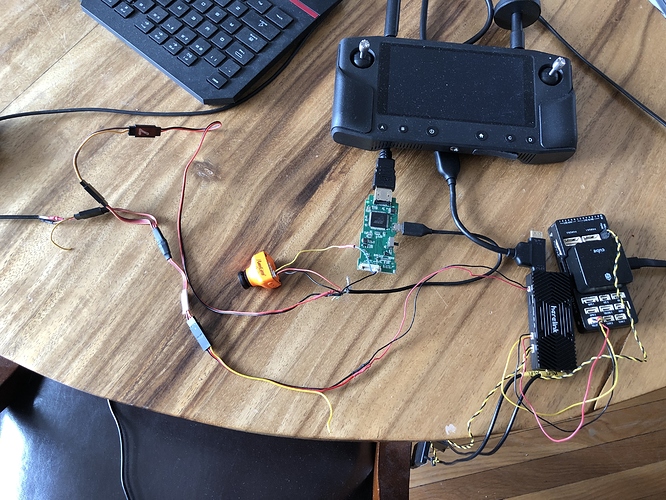 In season 1 episode 25 “The Devil in the Dark” Spock does a mind meld with the Horta, a sentient rock monster. What he learns is that the Horta is in a lot of pain. I am also in a lot of pain when I look at the picture above. It’s not quite working but it will and when it does it will be a terrible use of wire and printed circuit boards. Anyone out there working on an HDMI camera? Just say yes so that I know I won’t be in pain forever.

That’s a fairly familiar sight… Got plenty of spaghetti on my desk.

I have had it working with 2 cameras that have a HDMI output. (E.g. a Gopro). There are some cameras around that will work so keep the faith.

Hello All, I would like to thank Mad R/C for his vids on Herelink. As per your suggestion I have purchased GoPro7 Black, and the results are very disappointing. The video lag is very bad, I will take a note by Philip and will disable the stabilization.

Charlie618, can you please tell me if you have noticed any video lag with the Eken H9?

I have purchased Xiaomi Yi 1080P which has HDMI live feed with very minimal video lag compared to GoPro7 Black, but not supported by Herelink.

I wish the next firmware update will include support for some cheap good cameras, so it could be used as the main camera for controlling the drone, and the second HDMI connection could be used for more professional camera for aerial photography.

Here link can not change the firmware on your camera. If it’s HDMI out is not working check its settings and fix them.

It has nothing to do with the settings, I have GoPro7 Black and Xiaomi Yi 1080P and they both have live feed via the HDMI. I have checked the live feed for both on my computer monitor (Acer) and on my TV (Samsung) and the live feed works on both. When it comes to the Herelink only the GoPro7 Black works, and the Xiaomi Yi 1080P does not, Why? It has got to do with what cameras are supported by the Herelink system. Some thing called the driver which communicates with the software in the Herelink and the software of the camera.

Just try changing the video settings on your camera whilst connected to Herelink. E.g. video resolutions and refresh rates as well as PAL or NTSC. I had an issue with my old Gopro Hero3 initially and that works fine now after I switched it into NTSC.

I’ve now tried the GoPro 2018 and the Eken H9R as well as the class of solutions using FPV cams with an HDMI converter and I vote Eken:

The last trick which would be nice would be to initiate local recording over USB.

Raspberry Pi camera V2 (or even V1) with converter ?

The extra $25 for the Eken is totally worth it for a turnkey, compact, lower part count solution.

My problem is not the price, but the size. I really need something as close as possible like the FPV cameras.

I plan to use a ReplayXD Prime X camera that I bought a few years ago as my FPV directional camera. The company behind them are gone now but the camera still works great.

Do you mind if I ask what that circuit used to convert Video to HDMI came from? Is it the insides of one of those “mini” converters?

BTW, I am using a Flir Duo.

They suffer from bad jello effects.

Have a bunch of Aldi gopro look a like cameras (Bauhn) fixed HDMI output 720 50 fps can’t change it. Is there any way I can change the frame rate on QC video input as it does not have a 50fps option under 720p only 30fps or is it the hardware as per the specs.

Have you just tried it?