Hello 👋 from the Multirotor Design Team!

Hi everyone, we are the Multirotor Design Team, an official design team of Missouri University of Science and Technology in the United States. Our team designs and manufactures purpose-built, fully-autonomous UAVs to compete in various collegiate competitions. We primarily compete in the International Aerial Robotics Competition (IARC) This year, however, we are partnering with our university’s Rocket Design Team to compete in the Argonia Cup.

Here are some pictures and designs of our current competition drones. Note that they are still in-progress and have yet to be fully finished. 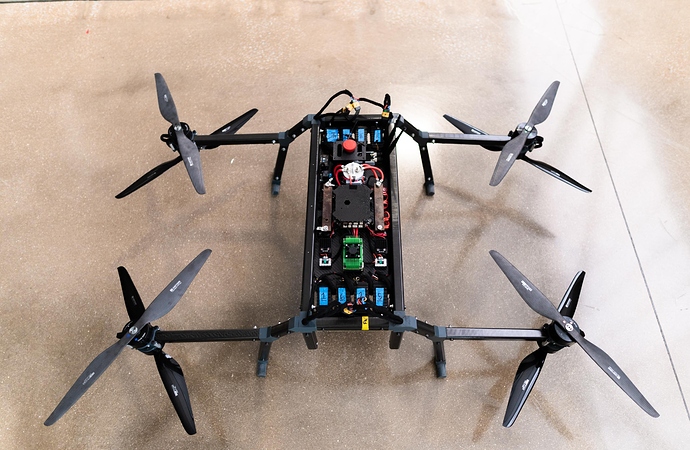 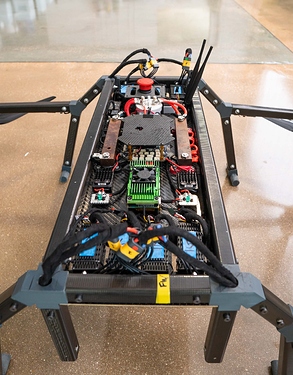 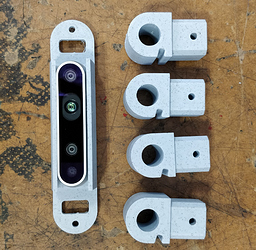 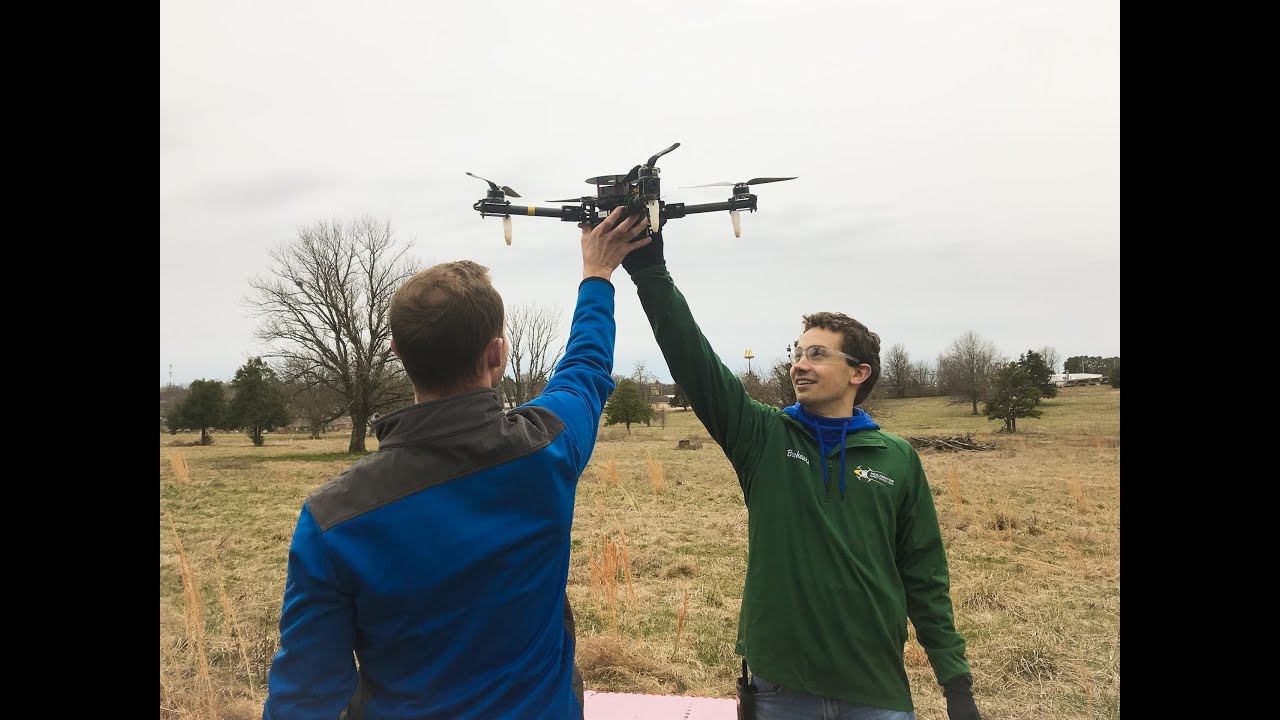 You can see a brief flight test in the video above.

For this year’s IARC competition, we need to first fly 1.5km with an antenna module payload around two pylons, then use our antenna to replace an existing antenna module on a moving mast, and finally flying 1.5km back around the two pylons within 7 minutes.

A big point to mention with IARC is that all the aerial robotics need to function autonomously without any human intervention other than a killswitch to turn off the robot during an emergency. In order to achieve autonomous flight with this drone, our team writes autonomous flight logic with MAVSDK-Python and computer vision algorithms with OpenCV and NumPy.

On the hardware side we are using an older Cubepilot Black and Here2 GPS from CubePilot. We also use the Nvidia Jetson and Intel Realsense to satisfy our software division’s needs. The drone itself is made with a variety of materials including custom made carbon fiber and 3D printed plastic for the sensor mounts.

The current challenge with this drone is weight reduction, because we can’t go over the FAA limit of around 55 lbs. Most of the weight came from the two batteries that we were using, which weighed around 15 lbs each. We will have to do some testing to make sure that we don’t actually need both batteries, as well as new joint designs to improve rigidity while also driving down weight. 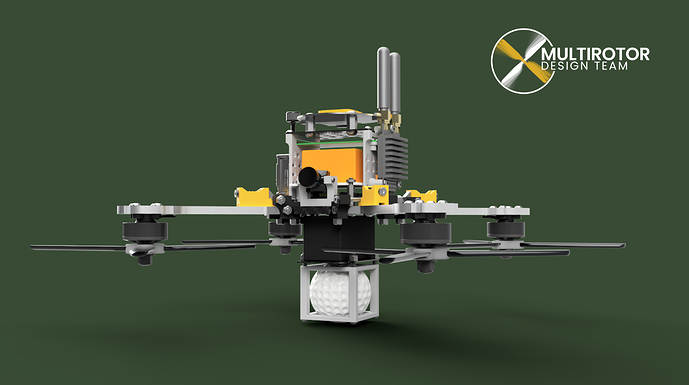 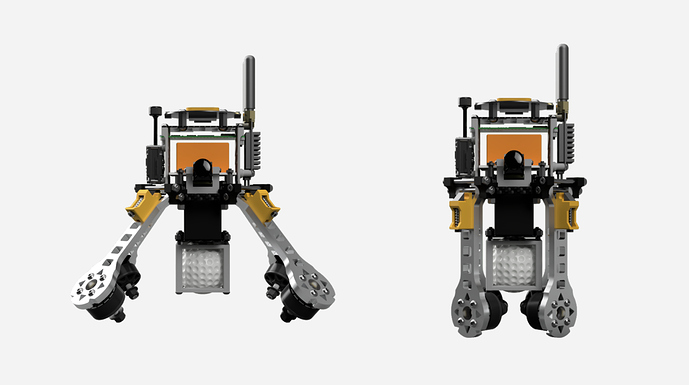 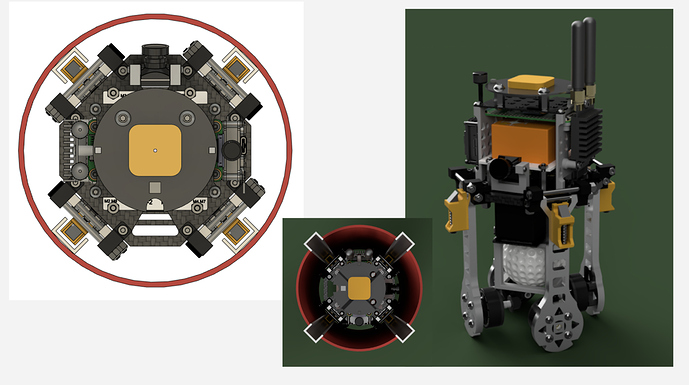 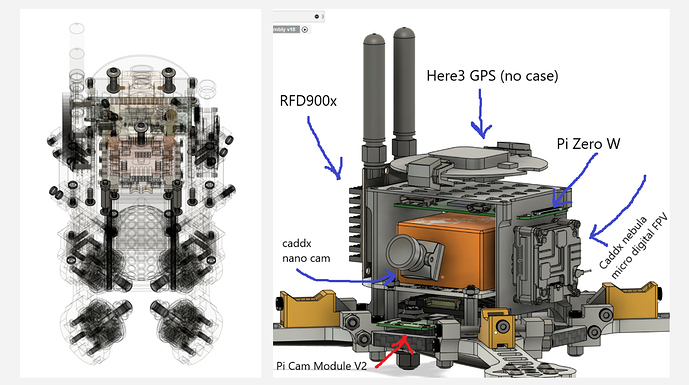 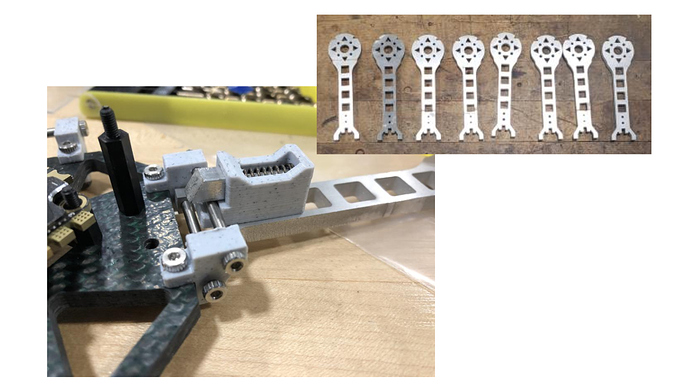 For the Argonia competition, our drone will be ejected from a rocket and will need to deliver a golf ball payload to a designated target. Most teams for the Argonia cup seem to focus more on the Rocket itself, but the collaboration between us and our school’s Rocket Design Team allow us to better implement the unique approach of using a drone to land the golf ball rather than ejecting the golf ball directly from the rocket.

We are using the Cubepilot Orange, Here3 GPS, and the HereLink for an RTK setup. As far as our strategy goes, we plan on making the drone function autonomously as much as possible, again with custom flight logic and computer vision running off of a Raspberry Pi Zero. As a backup, we have a FPV setup on this drone so we can manually take over if needed, as this competition has no official autonomy requirements for the drone.

As you can see from the above images, this drone is MUCH smaller than even your average drone, so we needed to be creative and have a folding design that’ll lock into place with a spring latch system. We still need to do some testing with this, but theoretically the thrust from the motors will generate enough force to lock the arms in place.

Summary
As our school comes back into session, we will post more updates. The Argonia Cup will happen in late March, and IARC will be happening late August. Again, thank you CubePilot for supporting our team!

Love it! Thanks for posting!

Alright folks it has been a while since we’ve posted our original update! Quite a few things have happened since two months ago.

Our new design uses an aluminum sheet metal to form a rib-cage design with carbon fiber supporting the bottom and sides in order to mount and hold our large batteries. Compared to our old solution, this saves at least 4x the weight and still seems to be sturdy enough based on our finite element analysis simulations. 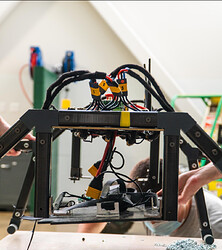 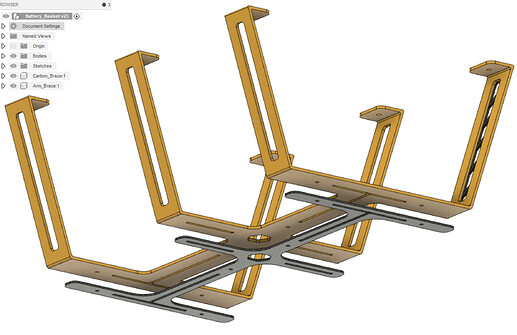 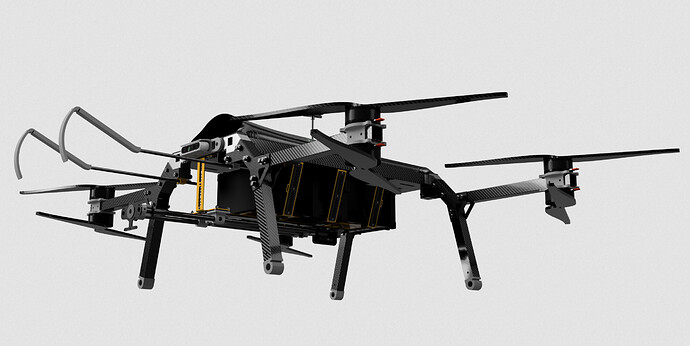 Screen Shot 2021-03-11 at 5.03.53 PM2678×1344 455 KB
Full assembly. The claws in front of the drone are used to pull an antenna module out of a mast, while the electromagnet setup right below holds our payload module that goes in place of the antenna module that’s being pulled out

Right now, we’re just waiting on a few key parts to get machined and we will start building early April.

Argonia Cup Drone
As for our Argonia drone, named Kraken, we revamped the folding arm mechanism. We got rid of the latch since it wasn’t performing as consistently or strong as we wanted, and opted to use external springs always apply a force move the arms up and a 3D-printed stopper to prevent the arm from moving upwards beyond a 90 degree angle. This solution ended up being far more robust and reliable compared to our first approach. You can see the new design as well as the full drone built in the images below. 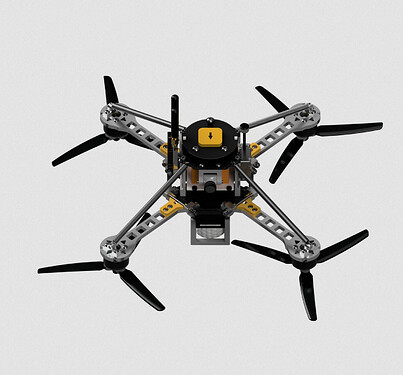 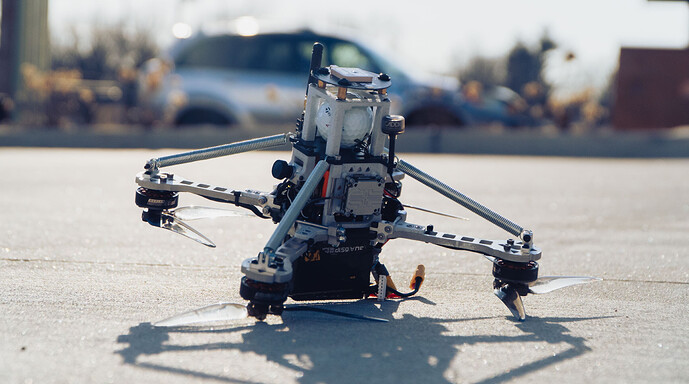 Upon an initial flight test of this small drone, there were a lot of wobbling and oscillations that we had to address that took us about a week and a half. We found various solutions that helped reduce some kind of wobble including PID tuning, reprogramming the ESC protocols, and making sure to either use only 4S batteries or wire in a capacitor if we wanted to use 5S or 6S batteries. The sum of those solutions contributed to the drone flying super smoothly.

Since fixing that issue, we’ve done a lot of range and flight testing to get ready for the Argonia Cup Competition that is happening this weekend. The team is excited to see Kraken in action, and we’ll keep you updated with how the competition goes!