I heard the newest update of herelink allows a dual ops mode to use two controllers to control the drone as well as the payload. Is there a manual or setup page outlining the appropriate steps for setup?

I tried turning Dual Cont and main toggle on the main herelink controller paired to the air unit on the drone. On the secondary controller I tried all the IPs as well as the default setting and I am not getting any inputs on the main controller joystick readout or in ardupilot? Do I need to hotspot them how are they communicating over IP between each other?

Do I need to hotspot them how are they communicating over IP between each other?

You need to connect them under the same network. Eg: hotspot/common wifi

Was this issue fixed I am having the same issue

No it isn’t when following documentation provided to setup the dual ops mode. There may be a step we are missing like many ardupilot procedures many are incomplete for complete setup and operation. Even after starting this thread with two controllers up to date as well as the air unit and following the setup page they still do not work. I haven’t seen a video or post saying someone has gotten it working. I just gave up and am running a separate controller through pwm to run our gimbal.

You saw this video? 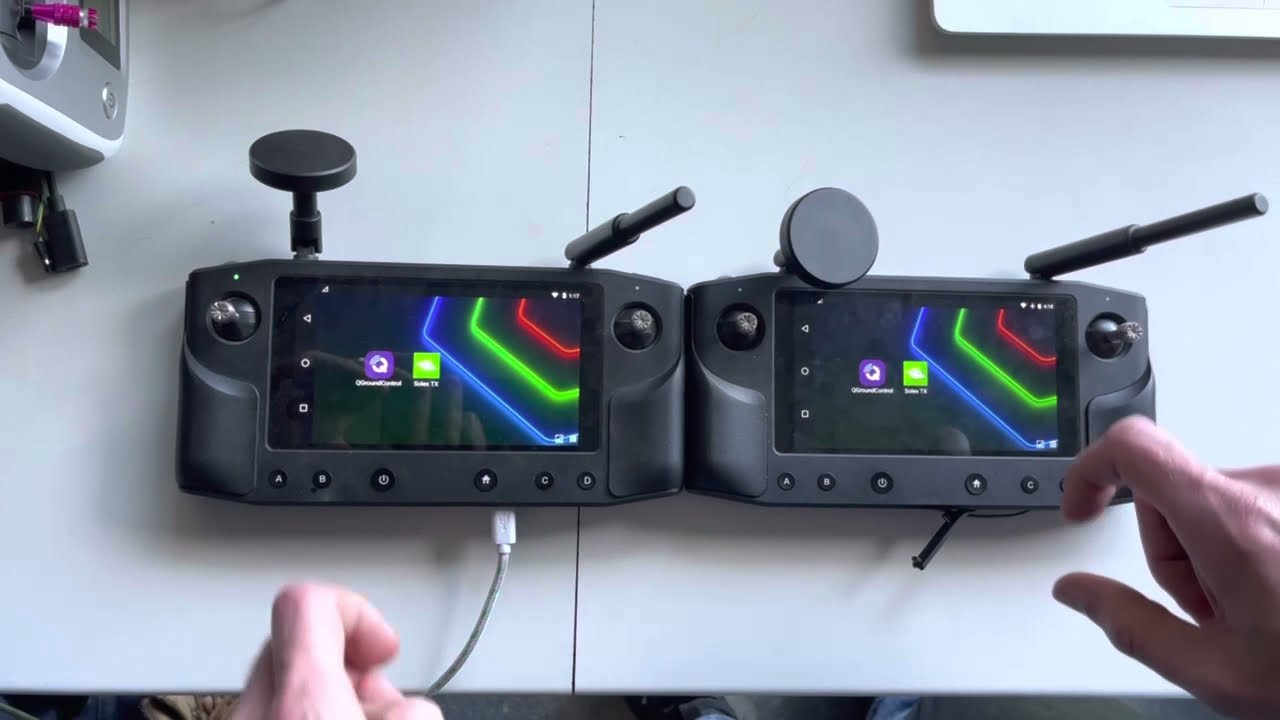 I tried also following this video, and every time I change and restart I have to factory reset the herelink controller because It then can no longer find Wi-Fi networks despite putting things back, infect the IP ending with 10 no longer shows in the list, and setting and saving default IP doesn’t even allow the herelink to connect to Wi-Fi even after restart.

Update: This is very confusing, though I managed to get it working, using dedicated drone RC Wi-Fi hotspot, and Payload RC connected to hotspot using Wifi, and using setting 192.168.43.1 on payload controller as well.

Are both air unit and controller on latest firmware? Also the Herelink Settings App?

The update APP within Herelink settings on both RC’s looks different because only one is connected to an air module, Update app does nothing on payload RC I’m also calling this secondary RC. both RC’s are on latest firmware, I do have both working for dual ops, except that the buttons aren’t able to be mapped from payload RC, Only joysticks and Gimbal tilt wheel are only able to be mapped unless I’m missing something. How am I able to control all aspects of the payload if I can’t get get all the channels for functions mapped.

Additionally When rebooting for next flight the controllers both primary (Drone RC) and secondary (Payload RC) Hotspot and Wi-Fi connections do not default to be on an ready and auto establish connection, requiring more time to get the system in the air… I even had to forget the Wi-Fi network on the secondary RC and reconnect it to get it working…

Also I’m finding if I map gimbal tilt function to say channel 7 on primary RC using dial and map the same channel 7 also on the secondary RC, The channel when controlled by secondary RC is glitchy on the final output of the primary RC and does not override properly thus little to no control I’m experiencing.

I think the problem is android doesn’t turn on hotspot automatically.

This shouldn’t happen though

channel 7 on primary RC using dial and map the same channel 7 also on the secondary RC, The channel when controlled by secondary RC is glitchy on the final output

You are not supposed to assign 2 different input to single channel. They will end up conflicting with each other. 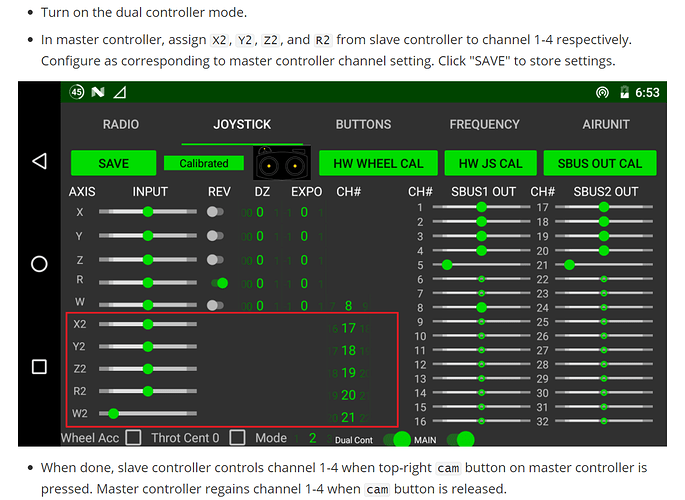 So you are saying it’s up to the payload programing that needs to be setup to listen to two separate channels and to prioritize which channel it listens to at a given moment?

Mavlink buttons? seems like I can configure buttons in multiple apps for limited, and none related functions for the payload I’m working with. I’ve never found a use for preset Mavlink buttons, and have never fully understood still to this day how they are supposed to work.

So the payload that is being supported listens to RC channels over Mavlink, as well as GPS ect… for controlling all custom functions of the payload.

At this point dual ops is a no go for me, and are trying to figure out how to optimize QGC to trigger payload via Mavlink command since I haven’ found a way to map camera trigger to a Mavlink RC channel… that is normally used for manual capture. Note: this is for auto mode missions, mapping specificity.

channel 7 on primary RC using dial and map the same channel 7 also on the secondary RC, The channel when controlled by secondary RC is glitchy on the final output

Ok. I re-read this line and I may have misunderstood what you mean.
Controller 1: ch7 - dial
Controller 2: ch7 - dial
If so, can you share a video showing how it is glitchy?

Mavlink buttons? seems like I can configure buttons in multiple apps for limited, and none related functions for the payload I’m working with.

I was assuming you are connecting the payload to autopilot. The mavlink button sends commend through telemetry, which sends feedback if the command failed to execute. Unlike the Sbus which you can’t verify if there was something wrong during the transmission.

So the payload that is being supported listens to RC channels over Mavlink, as well as GPS ect

RC channels are not Mavlink. Mavlink are send via telemetry. But you can use Mavlink to tell the autopilot to change specific RC channel’s output to a pre-set value.

I still don’t get how your payload works. Is it not able to change the input RC channel, so it is necessary to set RC channels from Herelink?
Are you only using Herelink to control the payload?

Payload consists of say a raspberry Pi onboard computer that’s connected to Pixhawk cube FC via telm1 port using USB to rs232 adapter for bidirectional telemetry data, where we can obtain GPS and RC channel information that rides on Mavlink, any S-bus receiver including herelink channels inputted to Cube FC can be seen on Mavlink. we have ability to map RC channels on raspberry pi end. so in other words we can support all RC’s like and including herelink.

Yes using herelink to control payload, every button is used. Flight modes are app only.

So to see channel glitch just map a joystick from secondary RC to say channel 5 that tilt uses on the primary and move the joystick on secondary and watch primary sliders, as well and the gimbal tilt I have the channel mapped to, it clearly looks like either are not taking priority.

You are not supposed to assign 2 inputs to be 1 input, otherwise you will get problem.
Exception is the joystick at ch1-4, assigning them to same channel is the trainer mode feature.