Herelink switches vehicle to STABILIZE without input, maybe because of Solex restart

During the first 5 flights on stable I observed twice that the Solex app restarted and after the restart the copter (latest, cube black) switched to STABILIZE. In one case it went to the ground fast but controlled (because hover throttle was too low) and in the other case I noticed early enough an was able to switch back to LOITER.

So nothing catastrophic, so I wasn’t too concerned about a mode switch. But during my last flight the vehicle emergency-disarmed mid-flight and when looking at the Log things started getting strange with a switch to STABILIZE from the Herelink. I didnt have a finger near the mode-button or the screen and had my eyes on the vehicle, so cant be 100% sure a Solex restart was involved, but I deem it quite likely.

I have no other apps on the herelink, nothing else connected, do pictures/video shooting, it was just a calibration flight. Flights were from a clean Herelink boot without changing any settings or starting QGC.

Please refer to this post and the log. A herelink bug report is with the logs. Bug report is from the next boot, i hope you can see anything inside at the time of the flightlog:

I just did an autotune flight with the copter, cube black + herelink all axes tuned fine, no problem, copter behaved stable. Then I set COMPASS_LEARN to 3.0 and armed to do a compass calibration flight. After a few minutes without warning my GCS...

Do not use channel mode switching, use Mavlink.

FWIW, Solex doesn’t switch modes at any time without user input, except for switching to Guided for Smart Shots (does not apply to HereLink) or for following a guided point placed on the map.

I have the flight channels mapped to the buttons sending Mavlink commands. Stabilize is short press button B. But I didnt use that in those situations, also sure not accidentally. My thumbs were on the sticks because i was performing movements for the compass calibration.

And it wasn’t an one-time event

In the vehicle parameters I have no flight mode channel set. The flight modes are left to default 0. Is it possible, that in the case of any restart event in Solex the vehicle defaults to stabilize because of parameters?

It looks like a command was sent from GCS.

I now went through my logs and found the incident earlier, when Solex crashed with app-restart. And right when the Solex was back the vehicle goes to stabilize and descends (because of low hover throttle).
In the log I can only find the confirmation that the vehicle switched to stabilize.
https://1drv.ms/u/s!AuKkq6JXpbFTzuwrchpztHNhA8JZfQ?e=hIq9PK 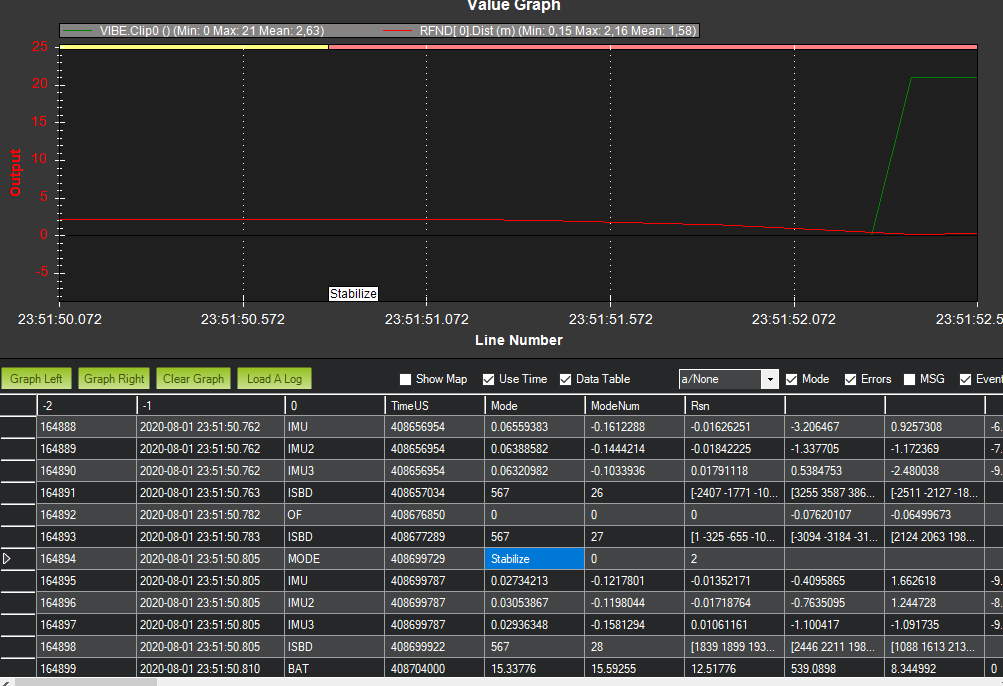 @sidbh, can you have a look at this?