IMU Heater - possible cause of failure

Earlier this morning I made a post about IMU failures I’m trying to diagnose. One possibility is hardware failure on my Orange Cube.

Digging in to the dataflash log, I discovered a large difference in the way the IMU heater operated between my first of three test flights (where the possible failure occurred) and the third flight - which operated normally.

I’ve included the comparison - but excluded the “P” value, as it distorts the y-axis on one of the charts do it’s large value.

The top chart is from the “third” flight - and was operated normally. The bottom chart if from my “first” flight - where the EKF3/IMU problems occurred. 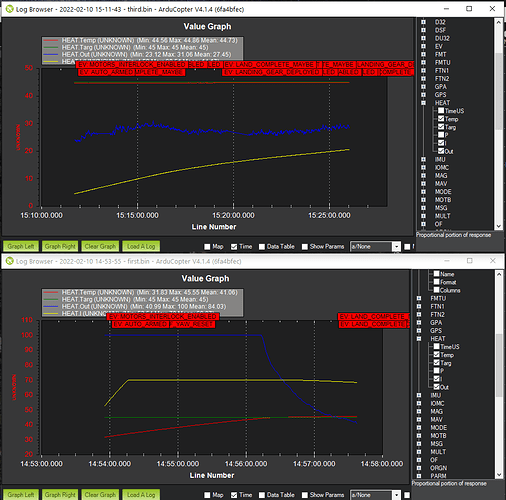 BIN from “third” flight - no problems:

BIN from “first” flight - problems experienced with IMU and EKF3:

The top chart is from the “third” flight - and was operated normally. The bottom chart if from my “first” flight - where the EKF3/IMU problems occurred.

HEAT.Out is the output of heater. In your first picture the target temperature had been met so it was frequently switching between on and off to maintain the temperature.

In the second picture the Cube was not pre-heated. It has to raise slowly from environment temperature. If you zoom closer at the section where HEAT.Temp met HEAT.Targ, the curve should be similar.