There is any way the drone land (using RTL or Landing option) always land on same the direction it took off?

You can check this parameter
https://ardupilot.org/copter/docs/parameters.html#wp-yaw-behavior

thanks, I think that is not what im trying to do.

If the drone took off at 120° yaw, has to land in the same direction.

My thought is to add an addition waypoint as the last point, which turn your drone to the correct heading before landing

thanks, that will work, but I cant ask the customer do that every time they have to land.

What else could I do?

As far as I know Ardupilot don’t have such function that allows you to face the drone back to same as take off.
You may request this as a feature at the Ardupilot forum

I think it should be possible to do that with a Lua script. You read the mission plan (there are examples for that) and inject some yaw re-positioning before landing.

Not exactly sure, but I guess there is a way to do that…

As far as I know, RTL always causes yaw (if required) to the same heading as takeoff. I dont think Land does anything but descend.

My experience is that yaw keeps the same heading he vehicle had when switching to RTL.

So just add a Lua script which monitors the flightmode and arming state. When arming changes to arm you store the yaw heading to a variable. When flightmode changes to RTL you just change the yaw to the value of the variable and let normal RTL logic continue. Should be no big deal and coded in a few minutes.

We have WP_YAW_BEHAVIOR,3 but actually I’ve never noticed that RTL doesn’t end up turning to face the same direction as take-off. From memory it does this yaw to original direction once the aircraft reaches the position above the launch site, just before descent.

With WP_YAW_BEHAVIOR = 1 (face next point) it lands with same heading it had during takeoff. 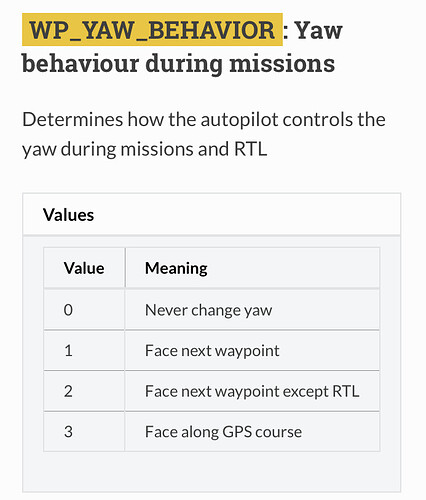 No, it works as @Sven describes it. I use this setting and the drones always land on the approximate same direction as they did takeoff.