(Solved) Joystick calibration does not work after update

After a successful FW update of the system, the Joystick calibration in HereLink Settings does not work. After pressing the HW JS CAL button and pressing the Start Calibration, the black circles will not move anymore. Pressing the Next, the sick movement to the red pointer gives no action. Pressing next again, back to the Start Calibration screen the red circles are centered, black way off and moving the sicks towards the red circles gives unpredictable results. I have to fail the calibration

@champ8242 can you share some images/video, so that we can get better idea regarding your issue.

The RH box is for the test after the calibration is complete. 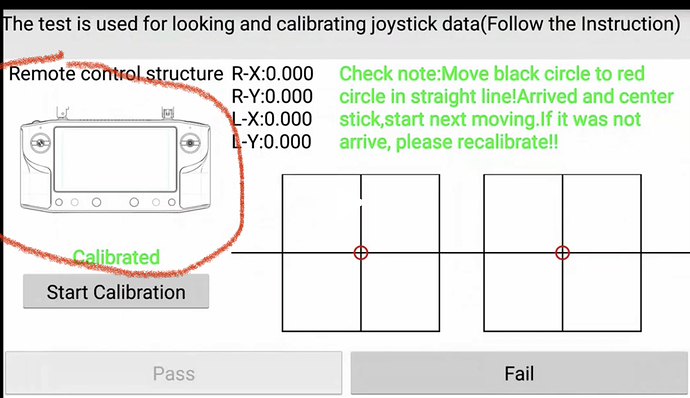 I also talk about this specifically in the video below at 5:20 onwards

Thanx for sharing this video Ian. I did mixed my actions with the message on the RH side of the screen like “move around and center stick” and “move stick to red pointer” in the second calib step.

This is quite confusing

Just done the update but under the old joystick mode you could click button to say centre stick was 0 power for plane as the stick self centre. Motor just throttles to 50% as it’s at centre. How do I set this so mid stick throttle is power off ?

Sorry took me ages to figure it out As am new to this setup. I changed RC3_MIN to above the neutral point which is 1505 for me. Throttle on ch3 now works on a nudge up to full powers from midpoint any lowers and no throttle.

Is that the best way of doing this or is there a better way ? Not thought if this will have any affect on auto with throttle responses ? As input will need to be over 50% won’t it ?

One thing I noticed is now missing is " Center stick is zero throttle " and " Spring loaded throttle smoothing". Is there any way to use these options in the new version?

These Center throttle should be coming soon I believe.

You mean in an upcoming update?

Yes. Thanks to the new OTA updating system, updates will be more frequent than previously.

Thank you very much for clarifying this. Do you have any rough estimate on when this will be implemented?

No, but what i know it that Hex/ProfiCNC are actually focused on Herelink and are spending a lot of energy to make it rock solid.

Thank you once again, this is really good news.

mayvena if you look at my post above that works. tested on x8 wing with throttle coming out of ch3 mid stick is showing as 0 and you can throttle up as before with the centre stick as zero.

I nearly broke my props today on fixed wing ground testing - assuming falsely that “center stick is zero throttle” was still there in qgroundcontrol - and finding out that its not there and what is much worse -not even possible to set at all anymore. Which means that I have to ground my fixed-wing and wait for undefined date - weeks or months - before getting this feature back?? If I would have known this - I would not have upgraded the firmware in the first place. This is really frustrating - its a major change in behaviour and a blocker for herelink fixed-wing use - effectively grounding the fleet. I dont recall it has been mentioned in any release notes or such - correct me if Im wrong here.

@MadRC @philip - is it certain that “center stick is zero throttle” will come back with next herelink fw update - or what is the current knowledge on this? Can’t do any flying tests - unless its back.

One possibility is the MadRC throttle mod?

Removing spring from throttle joystick is not an option in my case - I dont want to customize herelink hardware avoiding its warranty - and Im flying fixed-wing mostly in FBWB, CRUISE and AUTO modes. Just need to get “center stick is zero throttle” back somehow - so that throttle will be zeroed when joystick is in its normal/default position. Anything else is a hazard - as it would mean 50% throttle when switching to FBWA or manual mode (which would be ok only if removing the spring from joystick - but hardware modding is not ok).

Are there any ideas how to get “center stick is zero throttle” back (and still have throttle nudge operational)? Would raising RC3_MIN to 1505 help - or it will have undesired results with AUTO modes and throttle nudging then?

I can confirm that @suttonr proposed solution to set RC3_MIN (and RC3_TRIM) value to 1505 helps to get “center stick is zero throttle” behaviour back. At least on the ground tests now FBWA, stabilized and manual modes behave as expected - zero throttle by default. What Im not sure is how it may or may not affect FBWB and other auto modes during flight - when wanting to accelerate or slow down via stick mixing. Will it still work as expected - especially when trying to slow down by pulling left stick down?