I am building an s900 to use Cube Orange. I was all set to use a Mauch sensor and BEC’s, but then I saw a YouTube video of an s900 build using Cube Orange and they used the power module which came with the cube. It seems like a lot of amps to me for that power module, but I confess I am no expert.

How do I know if the power module which came with my Cube Orange is enough? I don’t actually know how many amps my s900 will draw.

Pretty sure S900 needs something better than stock power module. What motors are you running? Check the max current by them.

I thought so, thanks. Can you recommend, do you think I should go for the 100 Amp or 200 Amp model? I don’t know how to calculate for it exactly.

You can go with one 200A model if you have budget constraints since you won’t be operating at 240A all the time.
Or
2×200A with sensor hub to integrate the current values from both the sensors. Make sure you have right gauge wires at right places.

Ok. Budget is a constraint… but that’s why I can’t afford to fall out of the sky and will spend what I need to ensure that doesn’t happen :). I did not realize how to calculate for power modules. 200 Amps seems like a lot, and makes me wonder why when I bought a 200 Amp Mauch setup for my s1000, I was actually recommended to get 100 Amp but said I was in between, and could use either, so I chose bigger 200 Amp. The s1000 has the same ESC’s, but 8 of them, so 320 Amps max. I also did not realize that the sensor hub could be used on only one battery, as the documentation refers to it as if it is only for two battery setups.

So… This means I ought to be replacing my s1000 Mauch setup as well then. For my s1000, I installed the HS series. Currently I have this 200 Amp setup, using the optional backup BEC:


but it looks as though I should be using this setup:


except since I only use 1 battery, i’ll put both sensors on the same battery… 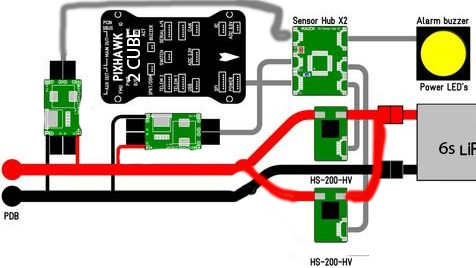 Right? And probably the exact same setup would work in my s900.

Thanks for your help on this important to me issue. I realize it’s beyond the scope of Arducopter. I have scoured the internet and it took several sources just to get some answers to some questions I had and without your post, probably would’ve fallen out of the sky with both copters.

I am using this one:

The fact that you’re using only a 180 Amp capable sensor makes me wonder what the rest of your setup is like total ESC’s max amps for each and battery setup you use.

I actually ordered one of those earlier… and when it arrived, only the white part (sensor) was in the package. Banggood didn’t even respond to my “did not receive” request.

I called dronetous.com and asked about

2×200A with sensor hub to integrate the current values from both the sensors.

He told me that setup is only for setups using two batteries, whereas mine is only using one. He talked like I could fly it using only a single 200 Amp sensor, but recommended I use a two battery setup, 2 sensors, and the sensor hub and talked like I should be more gentle on the sticks if using only one battery, in case it sucks more than 200 Amps.

After John from dronetous.com answered all questions I had, I ended up modifying my current power module setup for a 2 battery setup, up to 400 Amos total. I did it for both the s900 and s1000 and won’t be worrying about sudden power losses.