Herelink - Button Mapping - Sorry, I don't get it

as a guy coming from DJI stuff, I was really happy to see that there is some professional alternative to DJI Lightbridge and A3.

We already use the channel expansion kit on LB2 … The buttons and switches work, but the usability is a pain in the a**.

By switching to Pixhawk / Arducopter i promised myself to have less technical limitations, so I bought the Herelink and the Cube Orange.

After the basic setup, I came to the button configuration …

I am using a Alexmos Gimbal Controller and a Sony RX 100 and a PWM to Multiport Adapter (GentWire)
So I need one channel for zoom and one for video and image capture.

Anybody here use Herelink commercially?
How did you guys work out these problems?

Ok on the gimbal in Solex you can program a button to short and long press to change the Gimbal control output.

So for instance when standard it’s on Servo output 6 then long press A it would go to Servo 7, then short press A back to Servo 6, this could be used for two or more gimbal functions.

With regards to mode selection this must only be done via Mavlink command. You can in Solex set two on a button and map RTL to the home button as well. This was you get three. You can program more.

There will also be a load of Sbus options coming shortly however these must not be used for mode selection.

Hey Christian ,
I need your help , I’m using RX100 but not able to trigger the photo , as you have mention that you managed to do that with uper right trigger button , can you please share me the changes that you made .

@MadRC, i need ur assisstance.
I didnot update my herelink as i would like to know the following before updating my herelink:

What parameters to be set in herelink for button mapping to trigger camera with upper right button?

1. Can we use qgc to control the gimbal using a combination of scroll wheel and button i.e. for example: A button with 2 short press and one long press generating different output pwm values) can be used with scroll wheel to control 3 x functions like tilt, pan and zoom? (I have been using external board with herelink-old firmware for this purpose till now).

In the new update the system works as follow, all sbus output is controlled via the Herleink settings app, there are entirely independent of the apps.

Solex TX has options for mapping the Servo outputs on your controller on short and long press as well as momentary.

QGC only has mode options at this time.

Mapping in Solex and QCG are again entirely independent to each app.

As for controlling the gimbal via sbus you can not change the wheel output channel via a button, you can assign long ans short presses for a button and output and have momentary action with a short press.

You can not have a long and short press momentary action on the same button.

2. If not, how will this be possible with qgc in latest firmware? Will we have excess to pwm value so that i may use external hardware to control my gimbal.

Not in QGC at this time. You can in Solex.

4. The settings applied in solex for button mapping will automatically be the same for qgc? (In case mapping is not available in qgc, we may map functions in solex and later on use it in qgc).
@philip, till now, camera gimbal control has been one of the primary concern. In addition, the small screen size with poor sunlight visibility are the two main shortcomings particularly for surveillance based drones. (I blv the button mapping will be resolved but screen related issues will be there till design changes are not applied). We have also been waiting for herelink modular version i.e. Tx and Rx modules in order to be able to be used with out own RC and tablet.

No Solex and QGC are totally separate for their button options, Sbus programming via Herelink settings is global.

Hi @MadRC, @philip, @Julien , @Alvin
We have updated the herelink firmware to the latest firmware as per instructions given in https://docs.cubepilot.org/user-guides/herelink/herelink-user-guides. We have following observation regarding Button Mapping and Wheel Configuration.

It is very clear that Wheel channel does not change on respective button clicks. Can you please identify/tell whether there is something else required for override operation.

You can not override Sbus outputs with Solex TX.

The Herelink Settings App controls the PWM values of the output channel on the Sbus RC output.

Solex Controls Aux outputs on your Autopilot and is not related to the Sbus in any way.

They are two entirely different things.

So for instance to change the channel output of the Gimbal wheel you need to fully configure That in Solex TX as such.

On your Autopilot leave servo 7 Ie motor 7 as is default.

Then configure Solex to change the that Aux output from 7 to 8.

With Solex TX you need to configure it to use the Aux outputs on your controller. For instance Aux 8 is Motor 8. Aux 9 in Solex is Aux 1 on the Cube.

@MadRC, thanks for ur reply.
Please tell about following.

You can use the Aux channels for Octo

So Servo 1-8 is Solex is Channels 1-8 on your controller.

In Mission Plannner you should not need to assign a function as they are assigned to Aux outputs as standard but check.

I can post some screen shots later if you struggling

I am indeed very thankful for ur help. Since, we r in a hurry to hook up our quad and be in air, it wud be very helpful if u provide the screenshots.
Regards
Yasir Khizar

@MadRC,
Here are the list of functions that can be assigned to Servo. 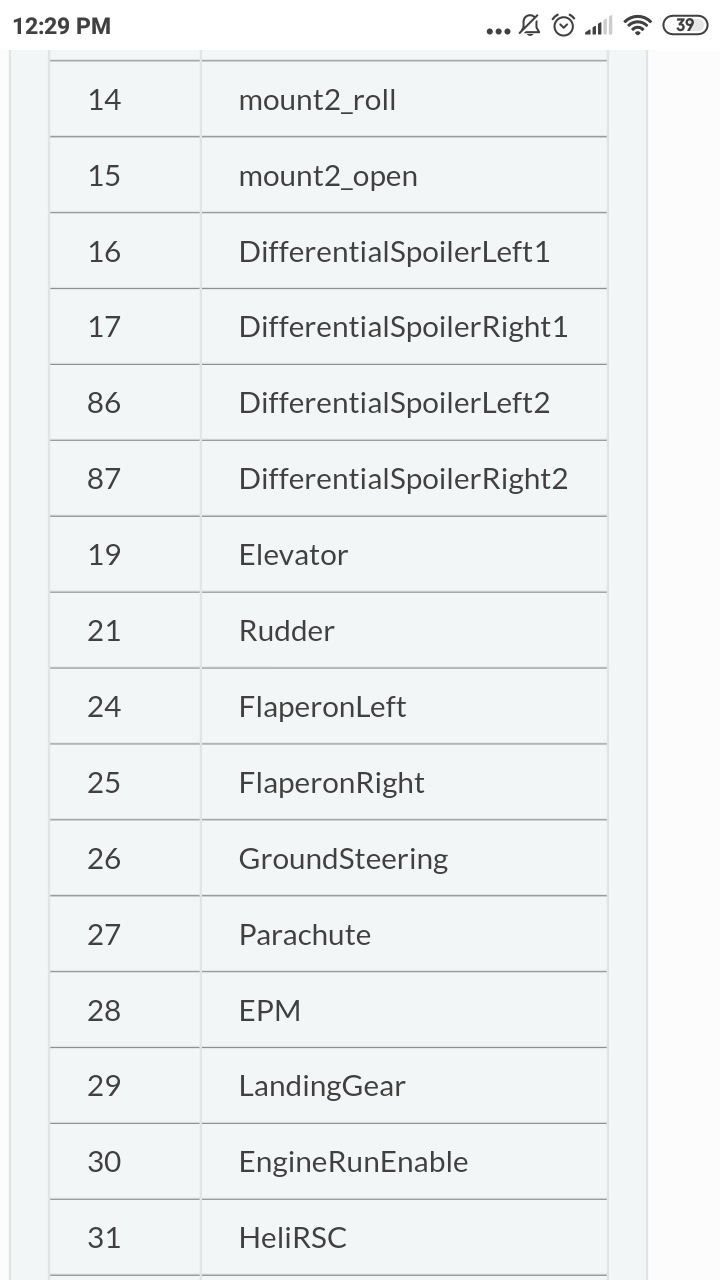 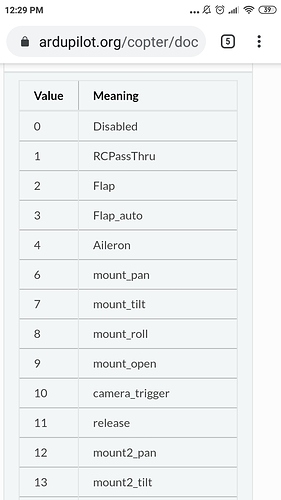 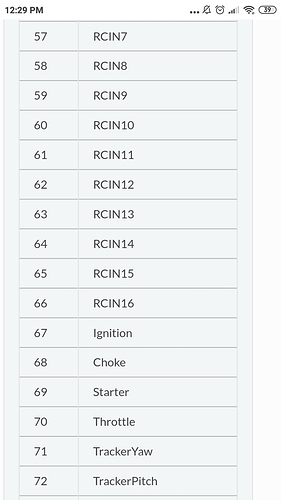 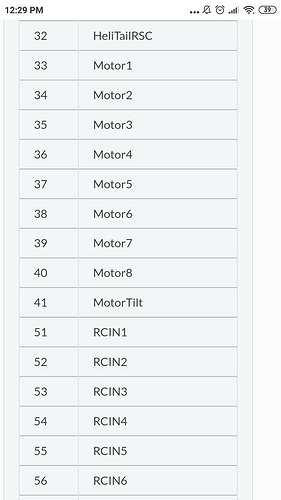 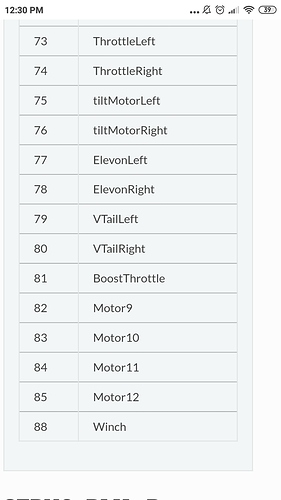 You leave them assigned to nothing ie disabled as that is the servo outputs.

So simply just assign the output in Solex and leave the channel In Ardupilot as default.

@MadRC, hi
Today i checked the wheel function assigned to servo buttons by disabling servo functions i.e. setting the default value as 0. The outcome was that none of gimbal function i.e. tilt, pan and zoom function worked. By enabling servos and assigning RC inputs to Aux servos of controller works but without wheel function dictating the buttons (assigned for pan/zoom) as explained in videos.
I would like to mention that the biggest problem in doing so is that even if it gets done in solex, it will not be working for QGC. The settings applied to solex and not applicable to QGC is not at all acceptable. I hope such problems will be resolved soon and will be covered in future releases. The designers (@philip) of herelink shud be thinking to resolve such issues.
Regards
Yasir Khizar

herelink and QGC are independent, pick one, and set it up

How to setup a three axis gimbal with the herelink and pixhawk cube orange ? Please explain me the whole setup as I am confused along with the wiring and programming. My requirement is to use solex tx app in herelink and use the wheel of the herelink ground unit to control the pitch, yaw and roll of the camera.