I am new to this and have purchased a black cube with the Herelink controller. I have been diving into the internet and trying to read as much as possible (a little intimidating). I see a bulletin and I am not sure it applies to me about the black cube and writing parameters before I get started. Do I need to do it and what exact parameters? Sorry, just getting my feet wet and it is confusing. Much appreciated.

This is where you would start
https://ardupilot.org/ardupilot/

And this is the main discussion forum for assistance and questions

I have been going thru it all, but I see these SB2 parameters that must be set before using the black cube. I am running PX4 and not ArdruCopter and when I try and find the must have SB2 parameters in my cube I cannot find them in PX4 that is loaded on my black cube. Is this just a ArdruCopter thing or do I need this if running PX4 firmware as well?

Talking about these parameters. Also, what is EK2 and EKF3 and how would I know which one to use? Thanks

Is this just a ArdruCopter thing or do I need this if running PX4 firmware as well?

ArduCopter. Not sure if the PX4 firmware requires these patches, or if they’ve integrated similar patches to address issues. If I’m not mistaken, they might not be subject to some of the SBs since PX4 is still based upon NuttX, not ChibiOS like recent ArduPilot firmwares are. Hardware-related SBs likely apply to both, still.

Talking about these parameters. Also, what is EK2 and EKF3 and how would I know which one to use? Thanks

They’re two different Extended Kalman Filter models that ArduPilot uses for navigation and stabilization. They’ve been in development in parallel for a while now, but I believe the intent is for EKF3 to phase out EKF2 at some point.

Which to use? EKF2 is well-tested and stable. If you have any doubts, don’t change the defaults.

As for in-depth differences? I’m not certain, beyond this snippet on the GitHub PR for it:

Deprecate EKF1 and replace with EKF3 for new feature evaluation

This has been tested using a pixhawk 2.1 on an Iris with range beacon only and GPS + Optical flow modes of operation. Tuning of the EKF3 is preliminary and provides equivalent innovation sequences.
EKF3 uses 24 states the same as EKF2 .
EKF 3 uses essentially the same interfaces and data buffers and control logic as EKF2.
EKF3 makes the following changes to the state vector:

This is expected to provide a more accurate attitude solution for the majority of use cases, but does lose some of the ability to recover from extreme attitude errors caused by bad IMU data.
At the moment it exceeds the flash space 1MB build limit that the build system applies to all Pixhawk 2 and lower boards regardless of capability, so a temporary change to the PX4Firmware has been made to enable it to be built for the Pixhawk 2.1.

I have had a tough 4 days figuring this all out. I switched over to Copter 4.0 and I do see the Parameter of EK2_IMU_MASK in the parameter list, but it is set on 3 and there is no way to make it EK2_IMU_MASK == 7. It will only go up to 6. Is 3 correct which was default when I downloaded Copter 4.0 and it asked me if it was a black cube and I said yes?

Having said that I tried a flight today and it was out of control and I am surprised I was able to get it back down. I will post my flight story and log on a new topic so hopefully someone can help me.

Much appreciated for all the help.

Max is 5, keep the defaults. 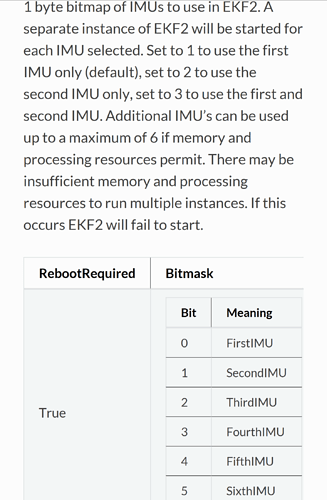 Very likely a vibration issue from what I’ve seen before. Get that log up!

This log was from my last flight which was very scary. I posted this on another topic, but if you see something in the log, please let me know. Much appreciated.

The review in the other thread (Almost crashed with Black Cube (first flight)) has the answers.

Really, really bad vibrations. I’m seeing a delta of over 70units for AccelZ when you were briefly in flight. I’m seeing delta of 10units or less for my AccelZ before I had really nailed down prop balancing/etc on my Solo.

Shit, when I flew my Solo into a backstop at a baseball field I only got detla of 88units for AccelZ