I could not understand the reason of it turning off when it had sufficient charge.

Note: I had updated the firmware of both the controller and the air unit as given in the Herelink user guide.

Please help me out in figuring out this issue.

I am also facing the same issue. During operation in flight the battery percentage dipped from 75% to 25% directly. Please help.

Need more info. How long was it on, have you fully charged it etc, what other apps did you have running

HereLink was fully charged. It was ON for 1 hour. Only Qgroundcontrol was running on the ground unit and the device’s hotspot was on as the data and video was being routed to another laptop.

Battery was functioning normally and the last time I checked it was 30%. Then just after about 5 minutes, the ground unit turned off.
On powering it back on, the battery percentage was 12%.

Batt should last a good three hours. Were you running Sloex or QGC at the time the batt voltage dipped ?

please check the android battery graph. and also which app/function was using all the battery?
this screen

Here is the android battery graph from my latest flight. I was running my customised QGC on the HereLink ground unit.
The HereLink rebooted on its own when it was 67 % 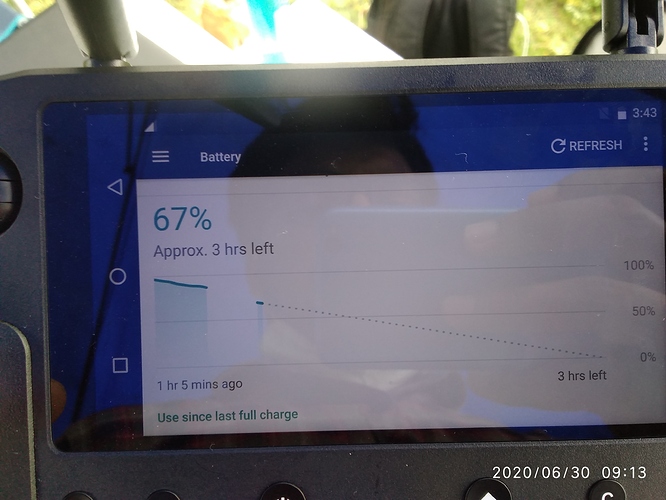 and there is a huge dip in battery percentage from about 55% to 30% while operation. 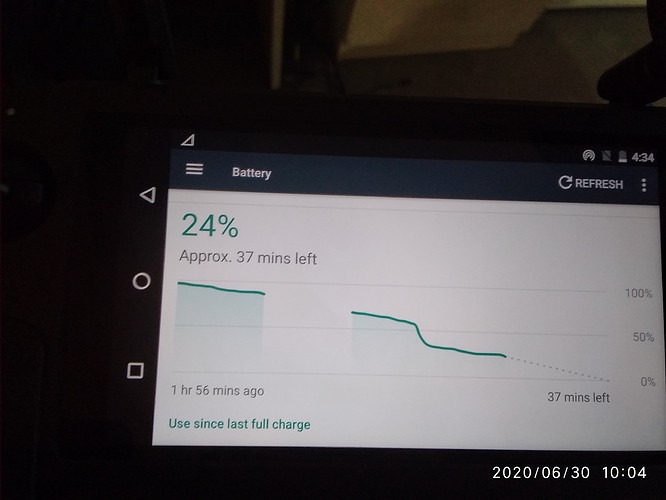 The data is of a 2 hour long testing conducted today.

my guess is you custom qgc is the cause. because its not using the gpu for video.

please try the stock qgc, and report back

also the remote unit has a 600mw transmitter in it and does video decoding at 1080p, so the battery life does go fairly fast.

Hello Team, I have recently purchased Herelink and it’s working well using the preinstalled QGC. I tried to build and install the QGC from the link mentioned in the Herelink User Guide in the remote unit. I changed the package name of the application, so that I can install it on the device without uninstalling preinstalled QGC. I found out that there was significant amount of delay in the video in the version that I built as compared to the preinstalled version. On checking the console logs, I …

@Michael_Oborne I have verified the custom qgc build in this case. It is using hardware decoder. Still we are facing the same battery issue. Kindly help.

on the battery screen, what app is at the top o the usage list?

Since we have updated to Stable Release, we are not facing sudden battery percentage drops anymore. However, herelink reboots often while sharing stream over hotspot. This is happening even when there is no app running on Herelink remote unit and its purely acting as a routing device to another computer.

to do video sharing you must have an app running. else the video stream will time out

I can confirm that neither QGC nor Solex is running while video sharing. And it doesn’t timeout. However, Herelink settings app is running as a service in the background.

Still facing the same issue. With hotspot and video sharing on another system the problem can be recreated. Please help. @Michael_Oborne

i think you need to clarify your setup.
also if it is rebooting, need a bugreport as well

Sure. I will tell you my observations in detail.

Case 1: We were flying our drone with Herelink Ground Unit in semi autonomous mode. The drone had a GoPro camera. We were viewing the feed on the remote unit and sharing it to another tablet using Remote Units Hotspot. After flying for some time the Herelink remote unit suddenly restarted even when it had over 50% charge left. Because of the Datalink loss failsafe, the drone safely came to home location and landed.

This has happened with us over 20 times in past one week. We have over 10 Herelink systems, the same issue can be seen with all of them.

please provide a adb bugreport after its happened. without this i cant do much more

also are you running a new firmware?